A Film Can Drop The Room Temperature to 17 ° C → Electrospinning

According to reports, two researchers at the University of Colorado, Yin Xiaobo and Yang Ronggui, invented a film that can cool buildings without the need for refrigerant and electricity. It is not only effective, but also can be mass-produced at a very low cost, only about 50 cents per square meter, equivalent to more than 3 yuan. 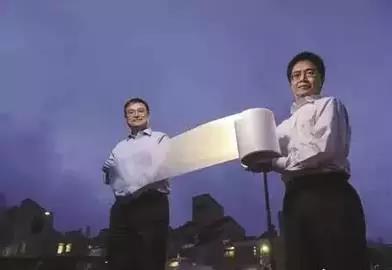 Their cooling film is made of a transparent polymer, a plastic, whose trade name is TPX.

They processed the TPX into a film about 50-micron thick, plated with silver on one side and a small number of small glass beads with a diameter of about 8 microns on the other side. When laying on the roof, the silver-plated side faces down, and the sunlight is reflected back by the TPX plastic to prevent heat from penetrating downward. However, the key to refrigeration is the small glass beads added to the film.

In this way, the cooling film directly “throws” the heat into space.

This film cooling effect is quite strong. The team estimated that laying 20 square meters of this film on the roof of an ordinary house in the United States would be enough to keep the room temperature at 20 °C at an outdoor temperature of 37 °C.

Air conditioning simply exchanges indoor heat to the outside, does not reduce the total heat of the earth, and even creates new heat during working. This kind of cooling film, like dumping garbage, emits heat into space, which not only cools down, but also alleviates the phenomenon of global warming, which is of great significance.

This cooling "artifact" can be used to stick it on the roof in the summer and cool down directly to a temperature of 20℃; it will not overheat when it is wrapped in a computer or mobile phone; it will be a real "air-conditioning suit" when it is used for clothes in summer.

This material can be used directly, but it has a certain range of use and is used where it needs to cool down all year round. For example, it can be used in cooling trucks, or cold storage around the city, planting fresh vegetables and other places.

Wonderful in silver and glass beads, let the heat go out, can't get in.

This material is like a one-way gate. The heat is out and can't get in. Although the cooling effect is remarkable when it is hot, will it be colder when it is cold? If it is to be used on the facade of a building, is it possible to achieve intelligent control?

If it is used outside the building in the summer, it is expected to save a lot of air-conditioning costs, but in winter it needs a control system to make it stop working.

At present, the team is conducting secondary development to let the cooling material open when it needs refrigeration. It can be turned off without cooling, and even the cooling can be controlled.

This requires the addition of other control equipment based on the cooling film. Although it is impossible to achieve zero power consumption, it will certainly be more energy efficient than air conditioning.

It is understood that the invention material has low cost, the production process is not complicated, and there is no major obstacle in mass production. Now the team is ready to produce films that are close to half a meter wide and are continuously produced, and more extensive production should be achieved soon.

Waiting for this cooling "artifact" to enter thousands of households, maybe in the summer "central heating", we can lie in a cool room, no longer worry about the fast-moving electric meter, the city power supply will not move pull the alarm.

How incredible the power of technology is!

The laboratory equipment for preparing the film is an electrospinning device!