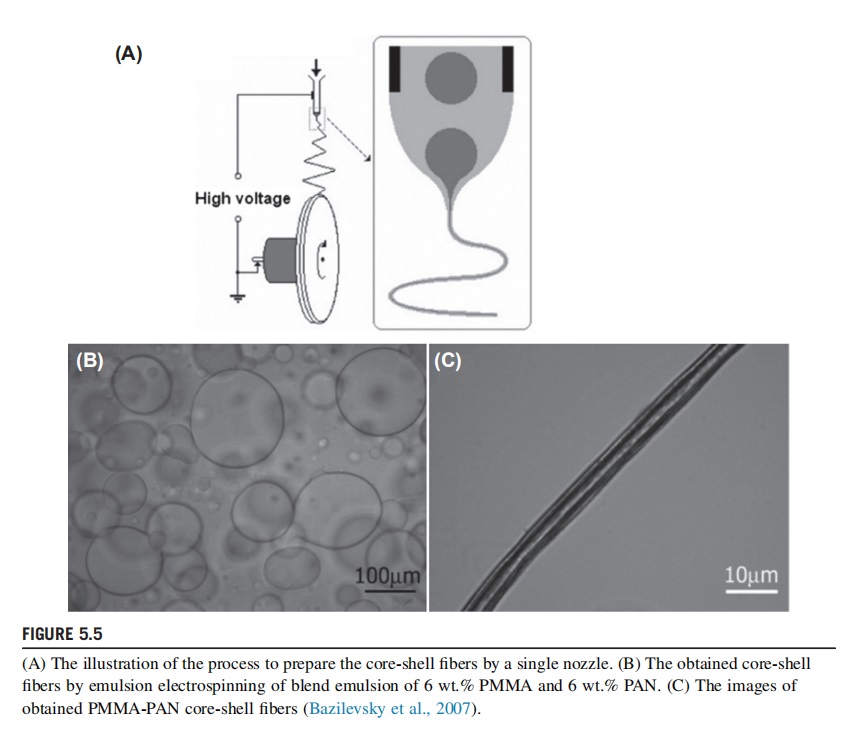 Coelectrospinning has been demonstrated to be a relatively simple and versatile technique in fabricating coreeshell fibers. While a novel process to fabricate coreeshell fibers by using a singlenozzle blended method has been further explored, that technology is called emulsion electrospinning. In the electrospinning process, the formation of the core-shell liquid stream is the key to the preparation of the coaxial structure electrospinning fibers. Theoretically, as the core-shell structure fluid is formed, the core-shell fiber can be obtained. Since an emulsion is a form of coreeshell suspension of droplets by wrapping one phase by another phase, emulsion electrospinning mainly depends on unique emulsion solutions and the electrospinning of the suspension solution. In the electrospinning process, when a high voltage is applied to the spinneret, a Taylor cone of core droplets wrapped by the shell droplets forms at the nozzle tip and is pulled into a coreeshell jet, and then the coreeshell fibers are collected (Xu et al., 2006). Jing and his coworkers prepared PEO-fluorescein isothiocyanate/polyethylene glycol (PEG)epolylactide (PLA) coreeshell fibers by the emulsion method. The diameter of the core shell increased with the concentration of the core fluid. In 2007, Yarin and colleagues reported a polymethylmethacrylate (PMMA)/polyacrylonitrile (PAN) emulsion solution. The PMMA droplets were assumed to exist in a spherical shape in the PAN solution (Bazilevsky et al., 2007). Fig. 5.5A-B show the homogeneous blend emulsion containing 6 wt% PMMA and 6 wt% PAN. The TEM images of the obtained coreeshell fibers show both inner and outer very uniform diameters (Fig. 5.5C). The outer diameters were 0.5e5 mm, while the wall thickness of the PAN ranged from 200 nm to 1 mm. This method can also be called emulsion coaxial electrospinning. It was expected to solve the drawbacks in traditional coelectrospinning process, such as the difficulty in positional concentricity of the spinning nozzle, and to control the internal and external flow rates.