Graphene is a two-dimensional carbon nanomaterials composed of carbon atoms with sp² hybridized orbitals in a hexagonal honeycomb lattice.

Graphene has excellent optical, electrical and mechanical properties, and has important application prospects in materials science, micro-nano processing, energy, biomedicine and drug delivery. It is considered as a revolutionary material in the future.Physicists Andre Gehm and Konstantin Novoselov of the university of Manchester, United Kingdom, have won the 2010 Nobel Prize in physics for their work in separating graphene from graphite by micromechanical stripping.

2. What are the applications of graphene?

With the gradual breakthrough of mass production and large-scale problems, the pace of industrial application of graphene is accelerating. Based on the existing research results, the first commercial applications may be in the fields of mobile devices, aerospace and new energy batteries.

Graphene has special significance for fundamental research in physics, allowing experimental verification of quantum effects previously only theoretically demonstrated.In two-dimensional graphene, the mass of electrons seems to be nonexistent, which makes graphene a rare condensed matter that can be used to study relativistic quantum mechanics -- because massless particles must travel at the speed of light and must therefore be described in relativistic quantum mechanics.This gives theoretical physicists a whole new direction: some of the experiments that used to be done in giant particle accelerators can be done in small LABS using graphene.

Graphene can be made into chemical sensors, and this process is mainly accomplished through the surface adsorption performance of graphene. According to the studies of some scholars, the sensitivity of graphene chemical detectors can be compared with the limit of single-molecule detection.Graphene's unique two-dimensional structure makes it very sensitive to its surroundings.Graphene is an ideal material for electrochemical biosensors. Sensors made of graphene have good sensitivity to detect dopamine and glucose in medicine. 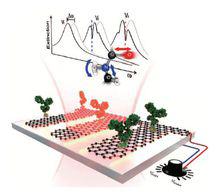 Graphene can be used to make transistors.Due to the high stability of the graphene structure, the transistor can still work stably at a scale close to that of a single atom.Silicon transistors, by contrast, currently lose their stability at around 10 nanometers.The fact that electrons in graphene can react very quickly to external fields allows transistors made from graphene to operate at very high frequencies.IBM, for example, announced in February 2010 that it would increase the working frequency of graphene transistors to 100GHz, more than silicon transistors of the same scale.

The flexible screen at the consumer electronics show has attracted much attention and become the development trend of mobile device display screen in the future.Flexible display shows a broad market in the future, and graphene, as a basic material, has a promising prospect.South Korean researchers have for the first time created flexible transparent displays made of layers of graphene and fiberglass polyester substrate.Researchers from Samsung and Sungkyunkwan University in South Korea have created a pure graphene the size of a TV set on a flexible, transparent fiberglass board 63 cm wide.They said it was by far the largest chunk of graphene.They then used the graphene blocks to create a flexible touch screen.In theory, researchers say, people could roll up their smartphones and pin them behind their ears like pencils. 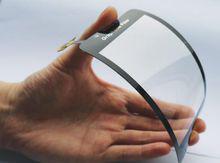 New energy batteries are also one of the earliest important commercial applications of graphene.The Massachusetts institute of technology has successfully developed flexible photovoltaic panels coated with graphene nano-coatings, which can greatly reduce the cost of manufacturing transparent and deformable solar cells.The batteries could be used in small digital devices such as night-vision goggles and cameras.In addition, the successful research and development of graphene super battery also solves the problem of insufficient capacity and long charging time of new energy vehicle battery, greatly accelerating the development of new energy battery industry.These results pave the way for the application of graphene in the new energy battery industry. 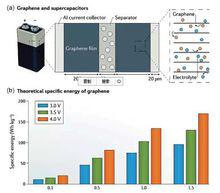 Graphene filters are used more often than other desalination technologies.When graphene oxide film in water environment is in close contact with water, it can form a channel about 0.9 nanometers wide, and ions or molecules smaller than this size can pass through it quickly.The capillary channel size in graphene films is further compressed by mechanical means to control the pore size and effectively filter salt in seawater.

Due to its high conductivity, high strength, ultra-thin and light properties, graphene has outstanding application advantages in aerospace and military industry.In 2014, NASA developed graphene sensors applied in the space field, which can well detect trace elements in the earth's upper atmosphere and structural defects on spacecraft.Graphene will also play a more important role in potential applications such as ultralight aircraft materials.

Using graphene as the material of the sensor, the new sensor is expected to be thousands of times more sensitive than the current CMOS or CCD through a special structure, and only consume 10% of the original energy.It can be used in monitor and satellite imaging fields, cameras, smart phones and so on.

Graphene is used to accelerate osteogenic differentiation of human bone marrow mesenchymal stem cells, and is also used to make biosensors for epitaxial graphene on silicon carbide.Graphene can also act as a nerve interface electrode without altering or damaging properties such as signal strength or scar tissue formation.Due to its flexibility, biocompatibility and conductivity, graphene electrodes are much more stable in vivo than tungsten or silicon electrodes.Graphene oxide is very effective in inhibiting the growth of escherichia coli and does not harm human cells.

Abstract: Carbon fiber fabric, as a special fabric with high performance, plays an important role in many fields such as wearable devices and energy.Carbon fiber has the characteristics of high temperature resistance, insolubility and strong intermolecular interaction, which makes the overall performance of carbon fiber fabric significantly lower than that of carbon fiber.One-dimensional graphene fibers are nano-sized single-layer graphene oxide sheets with high strength and toughness, which can be knotted or woven into conductive fabrics.The existing methods of chemical vapor deposition and electrostatic spinning are used to prepare graphene mesh fabrics.In order to realize high thermal conductivity and electrical conductivity of graphene mesh woven fabrics, the researchers in this paper successfully developed the first fabric composed of pure graphene fibers on the basis of continuous wet electrostatic spinning technology.The graphene fabric is completely composed of graphene fibers without any adhesives, and only USES the self-fusion between graphene oxide fibers to fuse the fibers at the contact points.Therefore, the graphene fiber fabric showed very high structural stability and thermal conductivity after high temperature graphitization.At the same time, the fabric borrows the structural form of non-woven fabric to make the graphene staple fiber randomly oriented and overlapped into a network structure, which greatly simplifies the preparation process and is conducive to large-scale production.

(c) The dried graphene oxide fibers were dispersed in a mixture of ethanol and water. 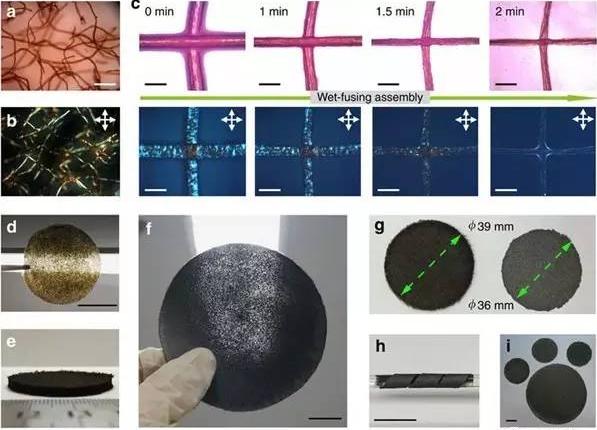 (d) Under LED irradiation, the graphene oxide nonwoven fabric with a thickness of 0.05mm was porous and light brown.

(e) Graphene nonwoven fabrics with a thickness of 3 mm were dark brown.

(i) Four graphene nonwoven fabrics with different diameters and thicknesses.

II Progress in preparation of graphene-based composite nanofibers by electrospinning

Abstract: The addition of graphene (G) as nano-filler in electrospinning nanofiber can help improve the performance of nanofiber and expand its application field.Electrospinning preparation at home and abroad in recent years was reviewed in this paper, the research development of graphene based composite nanofibers focus on graphene and polyamide (PA), polymethyl methacrylate (PMMA), polyacrylonitrile (PAN), titanium dioxide (TiO2) preparation research progress of composite nanofibers and its light catalyst, super capacitor, dye-sensitised solar cells (DSSCs), sensors, biomedical applications of potential, prospected the development prospects of graphene based composite nanofibers.

Abstract: The invention relates to a hollow porous carbon/silicon nano-fiber lithium battery cathode material doped with graphene and a preparation method thereof.It is composed of silicon nanoparticles and graphene evenly dispersed in the carbon nanofiber matrix.Specific preparation method is: with polyacrylonitrile/poly (methyl methacrylate/is the mixture of ethyl silicate/graphene oxide solution as shell solution, with polymethyl methacrylate solution as a core layer solution, using a coaxial electrospinning technology to get the polyacrylonitrile oxidized graphene/poly (methyl methacrylate/silica nanometer fiber, will receive the nanofibers in 200-300 ℃ under the condition of pre oxidation, and then in 500-1000 ℃ under the condition of high temperature carbonization, finally obtained by thermal reduction magnesium powder doped graphene carbon/silicon nanometer porous hollow fiber, lithium battery cathode material.The hollow porous carbon/silicon nanofiber lithium battery cathode material doped with graphene prepared by the invention has the advantages of large specific surface area and porosity, significantly improves the conductivity of the electrode material, improves the cycling stability of the lithium battery cathode material, and has a broad application prospect.