How Does The POLYMER/INORGANIC NANOPARTICLE MEMBRANES Perform In Air Filtration? 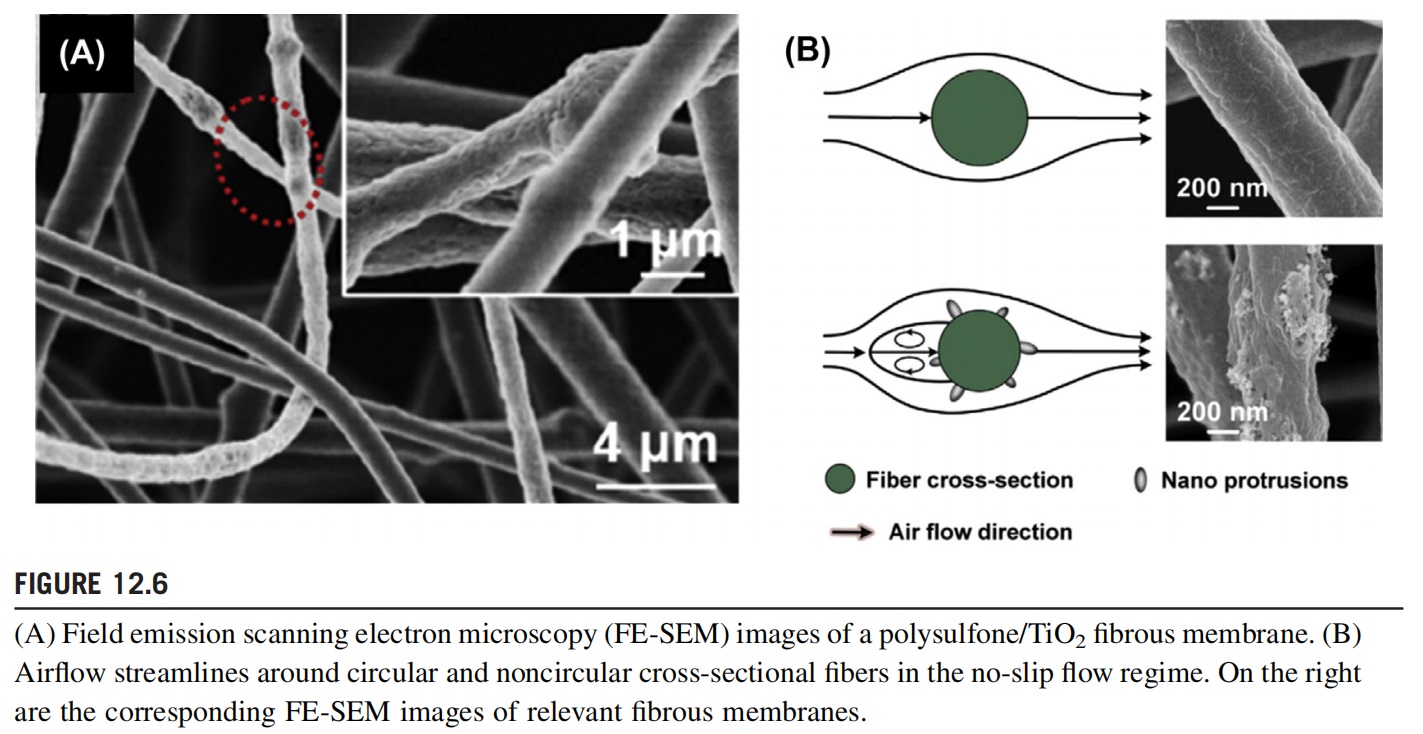 How Does The POLYMER/INORGANIC NANOPARTICLE MEMBRANES Perform In Air Filtration?

In 2014, Wan et al. described the fabrication of a hierarchically nanostructured and super-hydrophobic nanofiber medium for air filtration by electrospinning PSU/titania NP (PSU/TiO2) hybrid nanofibers on a traditional nonwoven substrate, as shown in Fig. 12.6A. They carefully studied the effects of solvent and TiO2 content in the solution on the structure of the PSU/TiO2 hybrid nanofiber membranes. By under of the hierarchical roughness caused by the incorporation of TiO2 NPs (indicated by dashed circle), the resultant hybrid nanofiber membranes exhibited a robust hydrophobicity, with a water contact angle of 152 degrees, and could facilely filter ultrafine particles with a high removal efficiency of 99.997% and low air resistance of 45.3 Pa, further indicating the contribution of TiO2 NPs to the filtration performance of the nanofiber filters. Cho et al. prepared TiO2-incorporated PAN nanofibers, which were deposited on a cellulose filtration medium to further increase the filtration performance of the filters. They observed that with increasing content of TiO2 NPs, the numbers of ions and charged particles on the membranes were greatly enhanced, which can be evaluated by thermally stimulated current measurement spectra. Therefore, the filtration performance of hybrid PAN/TiO2 membranes against 100-500 nm aerosol particles showed better efficiency than pristine PAN nanofiber filters, and the air resistance of the hybrid system was much lower than that of single-component PAN filter membranes. Wang et al. proposed a powerful yet economical approach to creating high-efficiency filtration media by combining multilevel-structured hybrid nanofiber membranes. The principal feature of this work is that these membranes were fabricated by the accumulation of SiO2 NP-incorporated bimodal-sized PAN nanofibers. The authors observed that the scaffoldlike structure of the as-prepared membranes can be regulated by regulating the jet ratio of the solutions with different PAN concentrations, which has a great influence on the filtration performance of the filters. The addition of SiO2 NPs made the fibrous surface rough, with a noncircular cross-section (Fig. 12.6B), and the specific surface area was enhanced by the highly porous structure. Benefiting from the layer-by-layer stacking structures and rough fiber surface, the multilevel PAN/ SiO2 hybrid membranes possessed a high filtration efficiency of 99.989% and low air resistance of 117 Pa compared with single-layer membranes.