Latest Paper of Electrospinning: Cellulose-based Electrospun Fibers Functionalized with Polypyrrole and Polyaniline for Fully Or

Authors and their institutions

Journal of Materials Chemistry A

A novel cellulose-based bio-battery made of electrospun fibers activated by biological fluids has been developed. This work reports a new concept for a fully organic bio-battery that takes advantage of the high surface to volume ratio achieved by an electrospun matrix composed of sub-micrometric fibers that acts simultaneously as the separator and the support of the electrodes. Polymer composites of polypyrrole (PPy) and polyaniline (PANI) with cellulose acetate (CA) electrospun matrix were produced by in situ chemical oxidation of pyrrole and aniline on the CA fibers. The structure (CA/PPy|CA|CA/PANI) generated a power density of 1.7 mW g−1 in the presence of simulated biological fluids, which is a new and significant contribution to the domain of medical batteries and fully organic devices for biomedical applications. 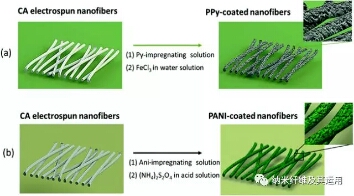 Fig. 1 Illustration of the methodologies followed for the preparation of CA fibers coated with (a) PPy and (b) PANI by in situ chemical polymerization. Fig. 4 (a) Mechanical properties (Young's modulus, tensile strength and strain) obtained for CA, CA/PPy and CA/PANI membranes and (b) results of the cytotoxicity tests of the CA/PPy and CA/PANI composites using the extract method. Absorbance values are normalized to the average absorbance of the negative control wells and vertical lines represent the experimental standard deviation of the mean. No detrimental effects of extractables on cells were revealed. Fig. 5 (a) Cyclic voltammogram obtained using CA/PPy as the WE and (b) mechanism suggested for the anodic oxidation of polypyrrole; (c) cyclic voltammogram obtained using CA/PANI as the WE; (d) mechanism suggested for the anodic oxidation of polyaniline; (e) I–V curve and power density determined for the bio-battery and (f) the charge and discharge capacity and coulombic efficiency obtained at a constant charge/discharge current density of 5.3 mA h g−1.

In this work, cellulose acetate electrospun membranes were evaluated as a polymer platform to produce fibrous conducting composites with high surface area. To produce cellulose-based composite fibers, the in situ polymerization of Py and Ani on the surface of CA electrospun fibers was investigated. CA/PPy and CA/PANI composites fibers were prepared through in situ chemical oxidative polymerization. During this study, chemical synthesis conditions, such as monomer concentration, the mass ratio oxidant/monomer and reaction time were investigated in detail. Morphologically uniform and electrically conductive cellulose-based fibers with high electrical conductivity – 10−2 and 10−1 S cm−1 for CA/PPy and CA/PANI, respectively – were obtained. Toxicity tests were performed for CA pristine membranes and CA/PPy composite fibers. Results indicate that the material tested is either free of harmful extractables or these are present at a low concentration which is insufficient to cause any acute cytotoxic effects capable of affecting cell proliferation and enzymatic activity. The electrochemical performance of cellulose-based bio-batteries was characterized by cyclic voltammetry. The composite materials, CA/PPy and CA/PANI, were used as electrodes (anode and cathode, respectively) for the construction of the bio-battery. This fully polymeric bio-battery showed a maximum power density of 1.7 mW g−1, which is a promising power value considering the power requirements of common implantable medical devices.

In summary, conductive CA/PPy and CA/PANI composite fibers have been obtained with the advantage of preserving the main properties of electrospun membranes, such as the flexibility, porosity and large surface area, making them suitable electrodes for the bio-battery. A fully polymeric bio-battery was developed and validated demonstrating promising performance results, thus making it a new, economic alternative for supplying low-power consumption medical devices.