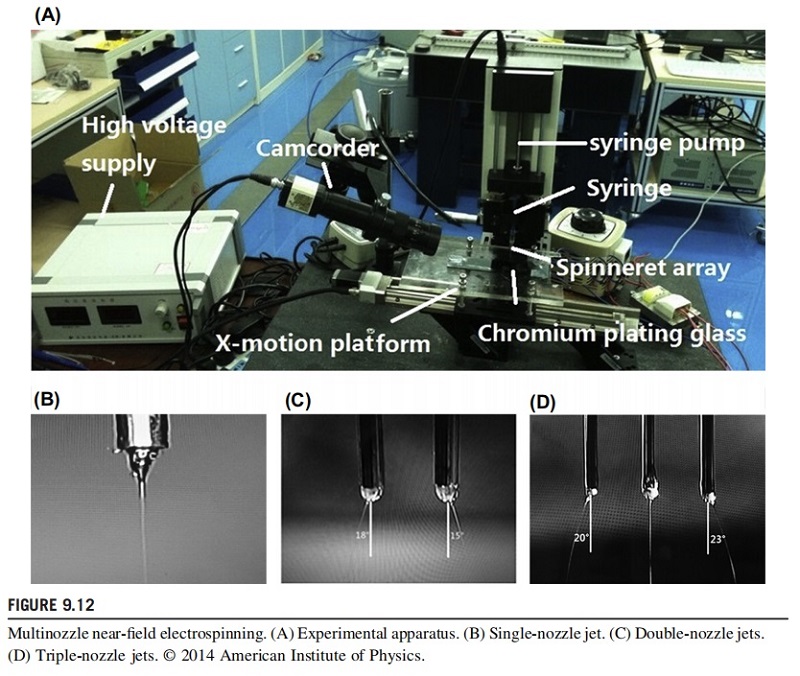 The normal setup of NFES is based on a single nozzle, which limits the mass production of precise nanofibers. So the method of multinozzle electrohydrodynamic direct writing has been proposed to improve the manufacturing efficiency and consistency. Han et al. observed the deposition characteristics of multiple jets, as shown in Fig. 9.12. In double-nozzle NFES, both jets move away from the vertical line, and in triple-nozzle NFES, only the intermediate jet flies vertically onto the collection plate. It can be concluded that the mutual deposition distance increases with increasing working distance and nozzle space, but the influence of voltage on the deposition distance is relatively weaker. Then, Wang et al. constructed arrangements according to certain shapes. As the number of nozzles increases, the electrical repulsion force in the horizontal direction becomes serious and the angle between jet direction and vertical line becomes larger. However, the change tendency of deposition distance is unaffected by the quantity of nozzles, so it is helpful to have more nozzles in NFES to increase the production efficiency.