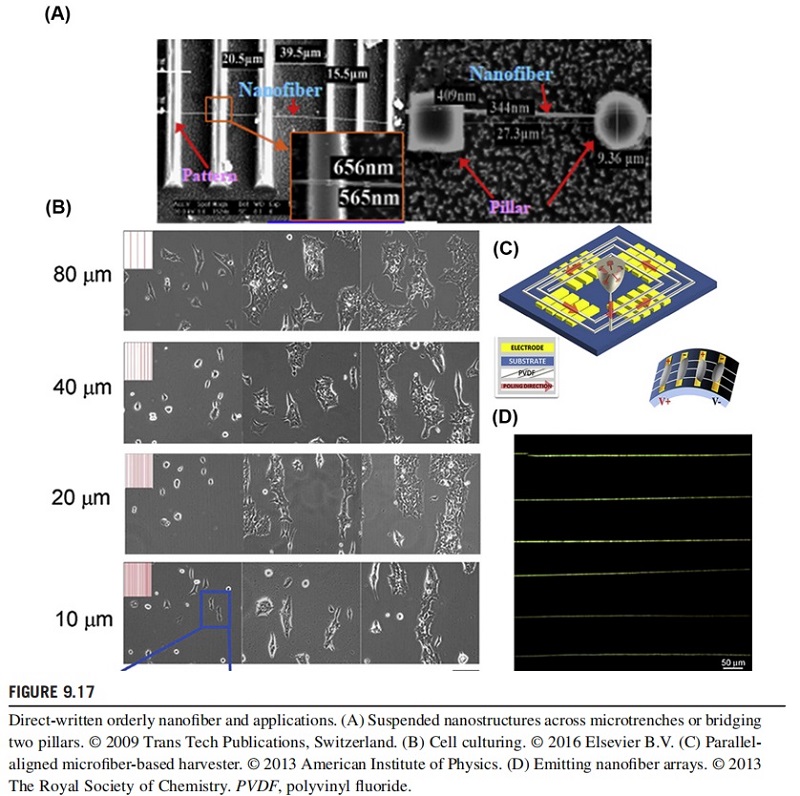 Owing to the great characteristics of high alignment, orderly nanofibers have been widely used in many fields. Fuh et al. (2016a) prepared alginate fibers in parallel patterns with different gap distances between fibers, from 10 to 80 mm. Because the diameters of animal cells are typically tens of micrometers, the NFES orderly nanofibers can be well applied in the guidance of cell morphology, as shown in Fig. 9.17B. Fuh et al. (2013) demonstrated the fabrication of polyvinylidene fluoride (PVDF) orderly nanofibers fully encapsulated on a flexible substrate by the process of NFES as shown in Fig. 9.17C. When the nanofibers are direct written in the same direction, the crystallographic orientations are aligned along the sweeping direction in situ, so that electrical potentials can be generated under an axial strain by bending the bottom plastic substrate. Di et al. (2013) realized the deposition of parallel fibers with a high alignment degree in which the distribution of angles formed by the fiber axis and the stage translational axis was much lower than that in uniaxially aligned fibers. Then, it was confirmed that orderly emitting nanofibers can be achieved effectively by the proposed method, as shown in Fig. 9.17D.